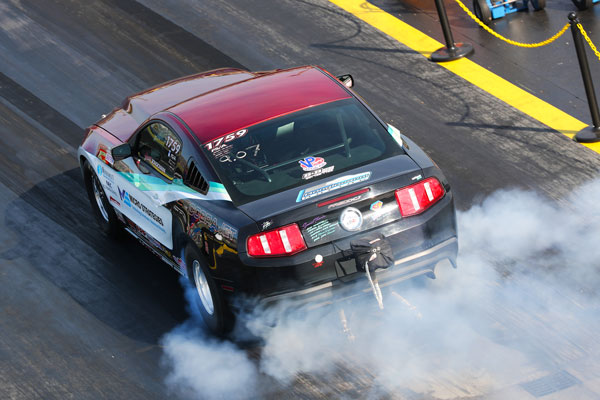 Three-time NHRA national event winner and Bongiovanni Racing team driver Ken Miele had a strong showing at the recent NHRA Virginia Nationals held May 17-19 at Virginia Motorsports Park. Miele was on his game, qualifying 11th in the field with his Micro Strategies and NEC Financial Services-backed Cobra Jet Ford Mustang in Stock Eliminator.

During qualifying Miele ran a strong 8.55-second quarter-mile pass at nearly 160 mph to set the pace for the weekend. “We had a few tuning issues due to a change we made at the previous race, but we figured it out and had the Mustang ready for eliminations, Miele explained. “We dial in the performance of the engine using a tunable electronic fuel injection that allows us to alter ignition timing and fuel requirements to find maximum horsepower and the best drivability. After the first run we found a bad sensor that was causing the engine to run erratically. With the new sensor in place we were good to go, he added.

Miele marched into eliminations with confidence. He defeated the Firebird of Gene Monaham in the first round, the Camaro of Jack Matyas in the second round and he used a quick .024 reaction time in the third round to beat Jim Marshall. Miele then faced NHRA standout Allison Doll who red-lighted, sending Miele to the semi-finals.

But the same red-light that gave Miele a win the previous round knocked him out of competition. “While we didn’t bring home a win, it was a strong weekend. I cut it too close and came up with a -.006 red-light, he said. “Nevertheless, we got down to four cars at a NHRA national event and that’s never a bad thing. We have a bunch of races coming up and we’re feeling positive.

Bongiovanni Racing won’t have to wait long to get back on track, as the team heads to Maple Grove Raceway near Reading, PA this weekend for the NHRA Lucas Oil Divisional Series event May 24-26. We hope you can join us!