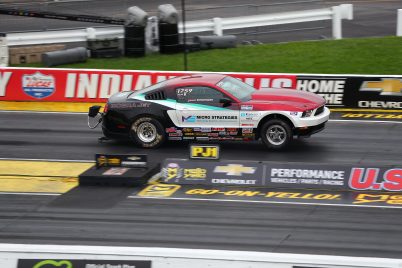 After a fun weekend at the NMCA Ford Performance Cobra Jet Showdown in Norwalk, Ohio, Bongiovanni Racing continued west to Lucas Oil Raceway in Indianapolis to compete in the 65th running of the NHRA U.S. Nationals. Also known as “The Big Go,” the U.S. Nationals is the crown jewel of the NHRA drag racing series. Held each year over Labor Day Weekend, it’s a marathon event, lasting six days with over 850 cars in competition.

With over 150 cars shooting for the 128 spots in the Stock and Super Stock fields, it’s a big deal just to make the show. The first task was to qualify and our drivers Anthony Bongiovanni and Ken Miele locked in during the first session. In Stock Eliminator 159 cars attempted to qualify, there were 158 in Super Stock.

The Big Go is unique because Stock and Super Stock racers have two chances to win. First, racers compete in “Class Eliminations” where they race heads-up within their own respective categories, then they move on to the main eliminator.

There were four cars in FS/A, and after two sessions Miele was first and Bongiovanni was second. Bongiovanni won the first round and Miele lost a tight one to Joey Shipp. Miele was .031 on the tree and ran 8.733, Shipp was .008 and ran 8.739. However, the quicker light allowed Shipp to get to the finish line first by just .017 of a second. This set up the final between Bongiovanni and Shipp.

Shipp produced a .013 light, but Bongiovanni was on his heels with a .052 reaction time. With both Mustangs on the march, the Bongiovanni Racing Cobra Jet tracked down Shipp’s Ray Skillman Ford-backed machine, crossing the line first with a strong 8.61 at 154 mph to Shipp’s 8.75 at 135 mph. This earned Bongiovanni his fourth NHRA U.S. Nationals Class win and a coveted Wally trophy.

Unfortunately, the racing luck ran out during final eliminations. Bongiovanni was uncharacteristically late on the tree in Round 1 of Stock, while Miele ran into mechanical problems causing him to red light in the same round. Bongiovanni then had the same fate in Round 1 of Super Stock, where he red-lighted by -0.003 seconds to end his chance at a U.S. Nationals title.

If there was a silver lining, Meile’s Cobra Jet was easily fixed and the team will be ready to go for the upcoming NHRA Mopar Express Lane Nationals September 12-15 at Maple Grove Raceway near Reading, PA.