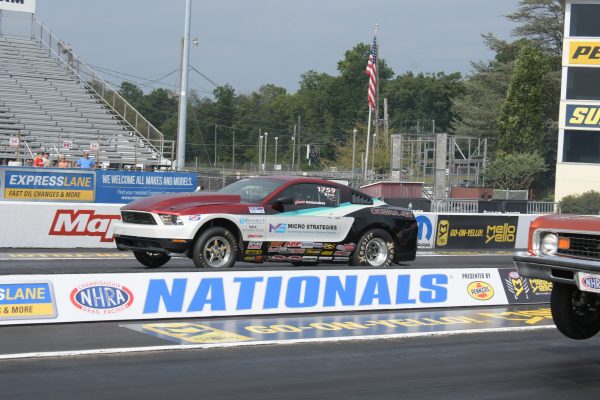 September has already been a busy month for the Bongiovanni Racing team with races in Indianapolis; Epping, New Hampshire, and finally Reading, Pennsylvania. The last two weekends consisted of the team’s favorite venues, New England Dragway and Maple Grove Raceway.

The Epping event was the second-to-last stop on the Lucas Oil Drag Racing Series tour and our team had a nice showing with Anthony and Michelle behind the wheel. Anthony competed in Stock and Super Stock, while Michelle competed only in Super Stock.

Anthony lost early in his Resource 1 Super Stock Mustang, but he ran strong in Stock, lasting five rounds. He was solid on the tree all weekend, having super-quick reaction times. With six cars remaining, he lost to eventual Stock winner Billy Pires by just .004 of a second. Michelle also had a great outing in her Micro Strategies Cobra Jet. Michelle was going strong until a red light against Jimmy Daniels knocked her out of the competition.

Kenny Miele was back in competition in Stock at “The Grove” along with Anthony in Stock Eliminator. Both racers qualified well and went into eliminations feeling confident. Anthony won a pair of exciting and very close races in rounds one and two but lost due to a -.007 red light in round three. Miele also had a pair of wins, followed by a loss in the third round.

“Four weekends in a row is tough for any race team, no matter how big or small,” said Anthony Bongiovanni, “but we have a great group of people, especially our crew chief Ricky Hertzog, who maintains the cars and haulers.”

“We had strong races and Kenny, Michelle and I did well with our driving. Michelle doesn’t get to compete quite as often, so it was nice to see her going rounds. We have a few races left and we’re looking forward to wrapping up the season on a high note. I’d really like to thank everyone involved with our team and racing program and as always, we’ll be looking to improve over the winter so we can come back stronger in 2020.”