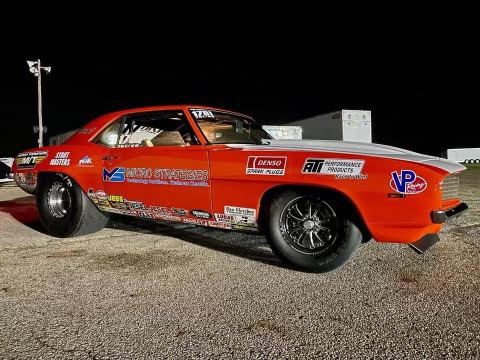 This past weekend was a good one for Bongiovanni Racing, with drivers Anthony Bongiovanni and Dan Fletcher in competition at the Lucas Oil Division 3 race in Hebron, Ohio. Division 3 is known to field tough competition and the team drivers came home with a pair of final-round appearances and valuable championship points.

The duo competed in Stock and Super Stock, with Dan driving his trusty Micro Strategies 1969 Camaro (the winningest car in the history of drag racing) and Anthony behind wheel of his quick Stock Eliminator 2010 Cobra Jet Mustang.

With 78 cars in Super Stock and 108 in Stock, it would take 7 rounds to capture a win. Both Anthony and Dan drove well and were able to make a final round appearance, with Dan making the money round in Super Stock and Anthony doing the same in Stock Eliminator.

Unfortunately, neither was able to cash the big check, as Dan took too much stripe and broke out against Zach Running and Anthony’s .057 light put him behind against Houston Raikes, who was .009 and dead on his 10.31 dial-in prediction. Anthony still made a race of it going 8.83 at 150 on his 8.86 dial-in.

“I was a little off on the tree, but the car was consistent and I was able to last quite a few rounds and make the final,” said Anthony Bongiovanni.

“Our Micro Strategies Mustang was performing well and that inspires confidence. But Houston gave me a fantastic race. He left nothing to chance, cutting a great light, and he was on the number at the stripe, congratulations to him and his team.

“Dan [Fletcher] also had a great weekend. He was so close to claiming another win with his historical Camaro. Dan’s father bought the car new and it has been a racecar its whole life. Dan has over 100 wins and many of them have come in the storied car.”

“It’s nice to have him as a team member. Dan looks at every angle. He’s a master of preparation. He lost a very tight race in the Super Stock final, it could have gone either way,” Anthony added.

Bongiovanni Racing will compete next at the Class Racer Nationals presented by Micro Strategies at Numidia Dragway July 31-August 1. This is a special event for Stock and Super Stock only with two days of competition, great prizes and special events such as a Runner-up, runoff heads-up action in Top Stock.