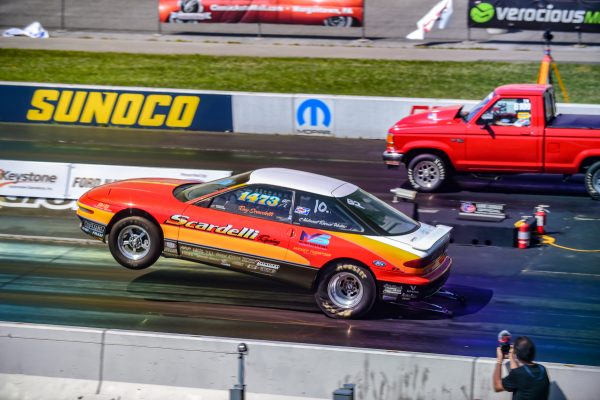 Maple Grove Raceway, also known as “The Grove, is a scenic racing facility conveniently located near the Micro Strategies offices in Malvern, Pennsylvania.

In addition to bringing out the team’s fast Fords, Anthony Bongiovanni, CEO, and the racing team hosted over 30 Micro Strategies employees.  Attendees got an up-close look at the race cars with all-access pit passes, saw an amazing car show, and enjoyed the racing from the Micro Strategies’ hospitality suite.

“This was a fun racing weekend and corporate event for Micro Strategies, said Ray Scardelli. “The NMRA does a fantastic job presenting family-oriented events with a wide range of racing classes from all-out race cars to street-legal Fords. We’ve attended NMRA races in Florida and are lucky enough have one in our back yard. This is a great track and the event was packed with lots of great cars.

“But more than racing, we hosted our employees and their families in our hospitality suite. Everyone got to check out our race cars and see the technology that goes into them. There was also a huge car show and manufacturers’ midway for those who like seeing all the parts and pieces that make our cars go, he added. “We had five cars racing so we entered different classes. This gave our employees a chance to see us on track all day.

The team ran strong, going rounds on Saturday and Sunday.

“After a long day, we made it to the final and won the Bracket 2 eliminator on Sunday, Scardelli added. “Racing requires a team, so it was nice to perform well in front of our employees and to let them experience the thrill of winning at the track.

In contrast to the Cobra Jet Mustangs driven by Bongiovanni, Ficacci, and Miele, Scardelli competed in his 1997 Ford Probe that’s been modified with a 289-cubic inch Ford V8. It also has a 4-speed manual transmission and has been converted to rear-wheel drive. His Probe regularly stands up on launch and covers the quarter-mile in less than 10 seconds at 130-plus mph.

Scardelli won a total of 7 rounds including the final, where he defeated Jay Fitts to hoist the NMRA “Victor a trophy honoring automotive industry icon Vic Edelbrock Jr.

“It was almost surreal, said Scardelli. “The race pace was quicker than we’re used to, so after each win we’d quickly get the car ready and head back to the lanes to the next round. I really didn’t think about winning until the semi-finals.

“After winning that round I knew I had a real shot to win the race. I was driving well and the car was very consistent. I rolled up there, did my burnout and staged. He [Jay Fitts] had a slower car so he got handicapped start. I was focused, nailed the throttle to get the engine to 8,500 rpm and I let the clutch go when the tree came down. My car hooked good and I started rowing the gears to catch him. At first I didn’t think I was going to cross the finish line first, but the 289 engine started eating up the track and I shot past him at the finish line, said Scardelli who won by just .009 second!

“When my win light came on it was a moment of pure elation. Winning is hard and it was so cool to do it in front of my work family, along with my wife and son Nick, who was also racing. Everyone in the NMRA was giving me the thumbs-up and congratulating me. The NMRA does a live Internet feed, too, and I didn’t realize how many of my friends were watching at home. My phone was blowing up before I even got back to the trailer.

“It was an exciting day, and I was so proud to win. We then headed to the Aerospace Components Winner’s Circle, where NMRA president Steve Wolcott presented us our prize money and the Victor trophy. It was really awesome getting our photos and finishing out the weekend with a win, he added.