This past weekend Bongiovanni Racing headed to scenic Numidia Dragway just west of the Pocono Mountains in Pennsylvania for a weekend of drag racing at the Micro Strategies Class Racer Nationals. This is a special event, held annually, where Stock and Super Stock racers are the stars and where competitors had the chance to win over $10,000 in cash and prizes over two days of competition.

Being a non-NHRA points event, the atmosphere was laid back as the Class Racer staff had a host of special awards for everything from Best Appearing car to Dirtiest Car and Worst Reaction Time. The event also included a second-chance race, a special Runner-up runoff for $500, plus the wheelstanding Top Stockers also thrilled the crowd.

Anthony Bongiovanni and Dan Fletcher took the reins, with Anthony competing in his 2014 Resource 1 Super Stock Cobra Jet and Dan driving his trusty 1969 Micro Strategies-backed Camaro. Both drivers drove in Saturday’s Super Stock eliminator with Anthony lasting a handful of rounds before losing a close battle when he unfortunately ran quicker than his predicted dial-in. Meanwhile, Dan was on a roll taking it all the way to the final round, where he split the purse with fellow competitor Billy Ryan. 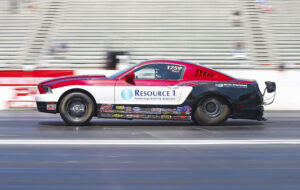 “It’s always great to be at Numidia Dragway, it’s one of our favorite tracks,” said Anthony. “This was the second-annual Class Racer Nationals and it’s a race we love to support. I was driving well and lost a tight race, but I’m proud of Dan for making it to the final.”

“It was also nice having my brother Michael at the track. He’s come out to support us in the past, but this time we put him behind the wheel. He drove one of our 1,000-horsepower Cobra Jet Mustangs and was able to make the required six passes needed to earn his NHRA competition driver’s license. He ran in the 9.0 range at 150 mph and did quite well considering this was his first time on a drag strip.”

“Michael drove our Micro Strategies 2008 Cobra Jet Mustang Super Stocker. It’s a very consistent and fast racecar, it’s the one normally driven by my daughter Michelle,” Anthony added. “We started him off with burnouts and launches, then he progressed to half-track runs and two 1,000-foot pass. Finally, he made two full runs to the finish line.”

“It was a thrill and much more intense then I expected,” said Michael Bongiovanni. “I’ve driven a lot of different high-performance cars, so I wasn’t nervous in the pits before my runs. But once I strapped in it was a different story,” he said. “It’s intimidating and I had butterflies in my stomach. The engine is incredibly responsive and there’s so much to remember. It takes a lot of finesse to do everything well, and you must in drag racing. One minor mistake can cost you a race. It’s amazing when the car launches, it’s like nothing I’ve ever felt before. It was it was an amazing opportunity. It looks easy from the outside, but I would have a lot to do before being ready for competition,” he added.

Bongiovanni Racing will be back on track at New England Dragway running in the NHRA Lucas Oil Divisionals series August 20-22. Be sure to follow them on Facebook and Instagram @bongiovanniracing.